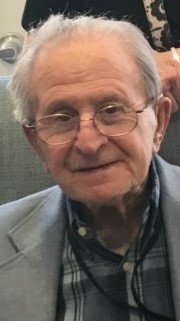 Paul Arthur Napolitano, 97, of Hamilton, NJ, passed away at his home in the presence of his family at Homestead at Hamilton.

Born in Trenton, NJ, Mr. Napolitano was a lifelong area resident.  He graduated from Trenton Central High School where he excelled in tennis and basketball. After graduation he attended Spring Hill College in Alabama on an athletic scholarship for both tennis and basketball.  His college education was delayed when Mr. Napolitano joined the Navy and served in the Pacific during World War II.   After being honorably discharged he returned to Spring Hill College on the GI Bill, where he continued his education and participating in sports while he completed his Bachelor’s Degree.

After commencement, he stayed on with the college for 11 years as a teacher and tennis coach. During the summers Mr. Napolitano would return home to New Jersey. While on summer break he would commute to Temple University completing the coursework to achieve his Master’s Degree. He then returned to Trenton with his family and became the Guidance Department Coordinator with the Lenape High School District in Medford for 31 years until his retirement in 1990.

Throughout his life Mr. Napolitano continued with his passion for sports. He was the tennis Pro and instructor at the Trenton Country Club, the Hopewell Valley Tennis and Swim Club, and the Hamilton Tennis Center.  He competed on the New England Tennis Circuit as both a singles and doubles competitor.  A highlight from this time was playing against Bobby Riggs and also playing doubles with him.  He was named the City of Trenton Champ six times and was inducted into the Mercer County Tennis Hall of Fame and the Spring Hill College Athletic Hall of Fame. It was through playing golf and tennis that he continued to enjoy being active well into his 90s.  In 2000, he was proud to have made a hole in one at age 77 on the Mountainview Golf Course.

Predeceased by his parents, Frank and Josephine (Di Blanco) Napolitano and his siblings; he is survived by his wife of 66 years, Mary Frances (Minor) Napolitano; his son, Arthur Napolitano and his wife, Joan, of Bordentown; his daughters, Debra Napolitano and Dodie Colavecchio of Hightstown and Teresa Banks and her husband, Bill, of Groveland, FL; his granddaughters, Meg, Fallon, Emily, Molly, SalliAnne, MaryJo and Hannah; and his great-grandchildren, Ava, Eli, Sydney, Gavin, Jovie, and Ila.

A Mass of Christian Burial will be celebrated on Wednesday, December 9, 2020, at 12:30 p.m. at Our Lady of Sorrows-Saint Anthony Parish, Our Lady of Sorrow R.C. Church, 3816 East State Street Ext., Hamilton, NJ.

Interment will be held privately.

Due to restrictions, the staff of Simplicity Funeral and Cremation Services at Glackin Chapel, respectfully requests all attendees wear a face covering during all services for Mr. Napolitano. Your cooperation is appreciated.

In lieu of flowers, contributions may be made in Mr. Napolitano’s memory to the Parkinson’s Disease Foundation, Our Lady of Sorrows R.C. Church or a charity of the Donor’s choice by visiting In Memory Of at inmemof.org.

To send flowers to the family or plant a tree in memory of Paul Napolitano, please visit Tribute Store
Wednesday
9
December

Share Your Memory of
Paul
Upload Your Memory View All Memories
Be the first to upload a memory!
Share A Memory
Send Flowers
Plant a Tree